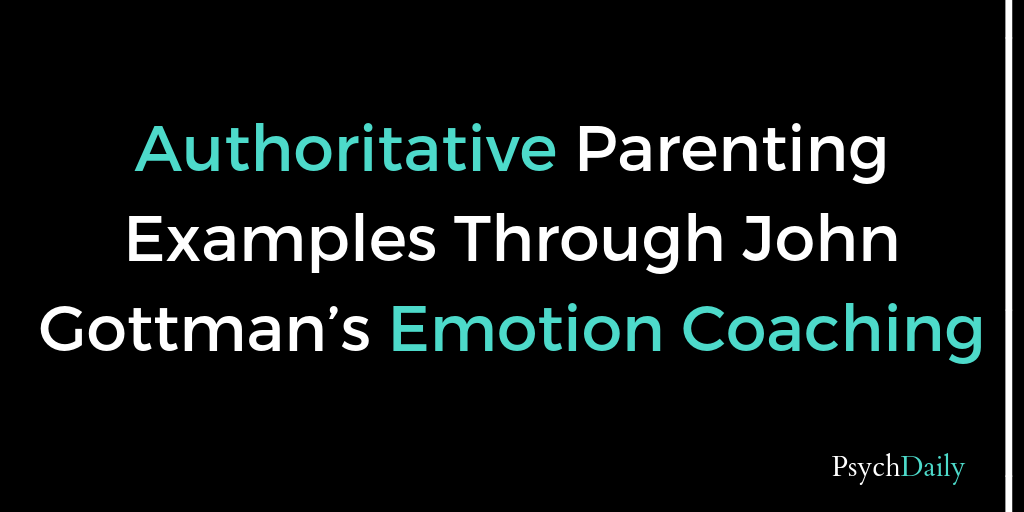 It’s okay to be angry, it’s not not not okay to hurt someone.

When using an authoritative approach to parenting as described in here, it’s important for parents to keep in mind their long-term goals. Children need to immediately stop harmful, destructive, or unkind behavior, but it is also important for children to gain emotional intelligence. This skill helps a child recognize his own feelings, the emotions of others, and how to express those emotions in healthy ways. Both goals can be met when feelings are acknowledged before a lesson is taught.

The Importance of Connecting and Redirecting

Recently I watched a toddler spill a small bowl of cereal on a table, which caused the milk to drip onto her clothes. She cried, spreading her hands and arms away from her wet body, a look of distress on her face from the cold, damp milk on her skin. Immediately, her dad scolded her and said to not put the cereal bowl so close to the end of the table. This led to more cries and tears. This would have been a perfect opportunity for the father to first comfort the child, then describe how to prevent this in the future when the child was more open to his teaching.

It’s tempting to want to lecture and teach a lesson immediately after a misbehavior occurs, but this is often the most unproductive time for the lesson to be internalized. Authors Dan Siegel and Tina Payne Bryson, who coined the term connect and redirect, describe the importance of giving warmth and connection before directing a child to a lesson to be learned.

As the author’s state, when children misbehave, emotions are running high and can take over the logical, rational parts of their brains, making any attempt at moral reasoning unfeasible. It’s best to initially support and calm the child, allowing the rational part of the brain to engage, before redirecting them to a better activity or teaching a lesson.

Parents may be hesitant to first comfort a child after disobedience has occurred because many parents were told in the past to ignore a child who is acting out such as during a tantrum. Here is what approaching misbehavior with warmth is NOT: 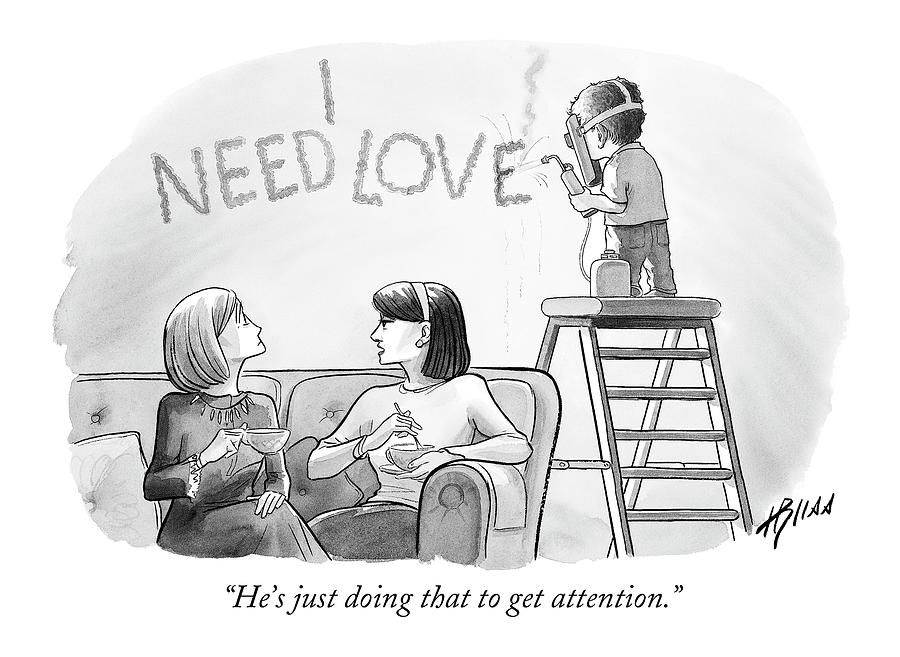 Image by Harry Bliss from https://condenaststore.com/featured/hes-just-doing-that-to-get-attention-harry-bliss.html

This is the vital job of every parent. Trust, compassion, empathy, ambition, and confidence in childhood stem from your love and guidance. Some parents worry that giving a child attention during poor behavior will reinforce it, causing it to happen again (refer to this article if you have similar qualms). This may become the case if a parent’s attention is contingent solely on bad behavior. Time and attention should be given indiscriminately instead. High emotions from misbehavior are when children need their parents the most. I echo Erma Bombeck who said, “A child needs your love the most when he deserves it the least.” Spoiling occurs when children are immediately handed their every whim, when they are quickly bailed out of situations without first requiring

critical thinking, and when parents model entitled and ungrateful attitudes. Spoiling is not time spent, support offered, or attention given.

Connecting with a Child Through Emotion Coaching Increases Emotional Intelligence

How does it feel when you’ve opened up to someone close to you about a struggle you’re going through and he or she immediately dismisses your feelings? Perhaps you presented an idea at work that was ridiculed, and you felt ashamed or embarrassed. Maybe you were disappointed or upset by a surprise doctor’s bill or have been feeling overwhelmed with all of the expectations placed upon you. What if your vulnerable feelings were met with, “Don’t be so dramatic, you’ll be fine?” Do you feel better? Likely this type of reaction would be very hurtful, yet I see parents dismiss their children’s feelings often.

What does it mean to connect with a child before redirecting them? Parents should use what John Gottman called emotion coaching. This consists of:

Helping your child recognize the emotions of others. When children can recognize their own emotions and others’ feelings, their capacity for empathy increases. The moral lesson you want to instill is more easily received. Rather than saying, “Don’t hit or you’ll get time out,” try, “When you push your brother, he feels hurt. Do you remember when you felt hurt?”

There may be times when it is not appropriate to use emotion coaching such as when you are in a hurry (quality parenting takes time), there is a concern for safety, you are too upset to be effective, or your child’s emotions do not match the situation because of a more serious underlying factor such as abuse that needs to be addressed. If your child is worked up and you respond with intense angry emotions, often the negative emotions of the child escalate. Emotion coaching is effective when you are in a state of mind to teach, not harm. As Rorke Denver said, “calm is contagious.”

Emotion-dismissing parents seek to deny or change a child’s negative emotions. They may state things like, “You’re fine, brush it off;” “Don’t be silly, there’s no need to be upset,” or “You’re overreacting, don’t worry about it.” When a child is feeling sad, but he’s told his feeling is wrong, he is likely to feel unsure about his ability to recognize his own emotions. He is taught that his own feelings should be suppressed and ignored because they are bad. These children are more likely to have behavior problems because they in turn dismiss the feelings of others. 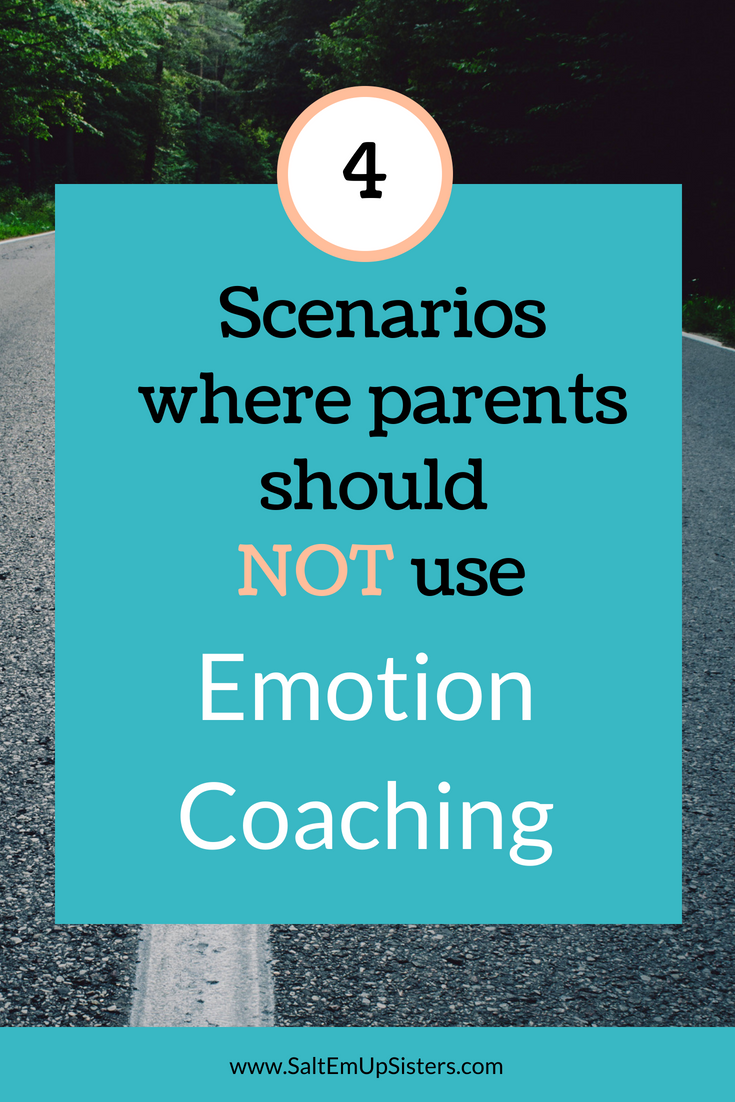 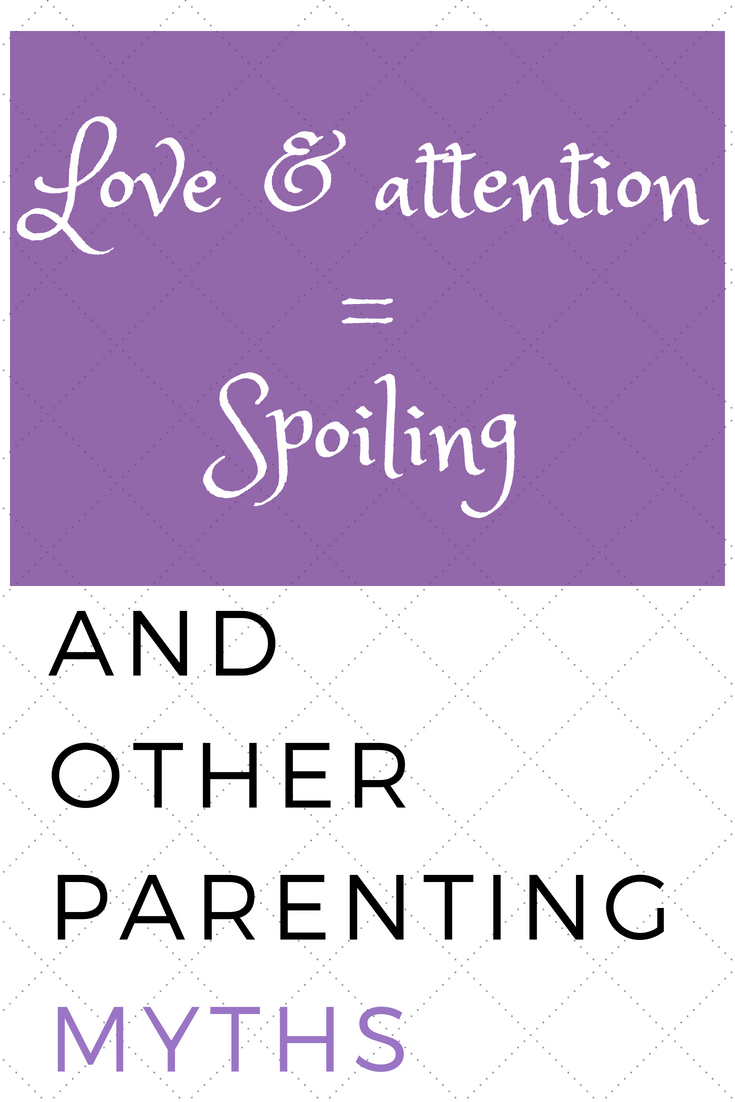 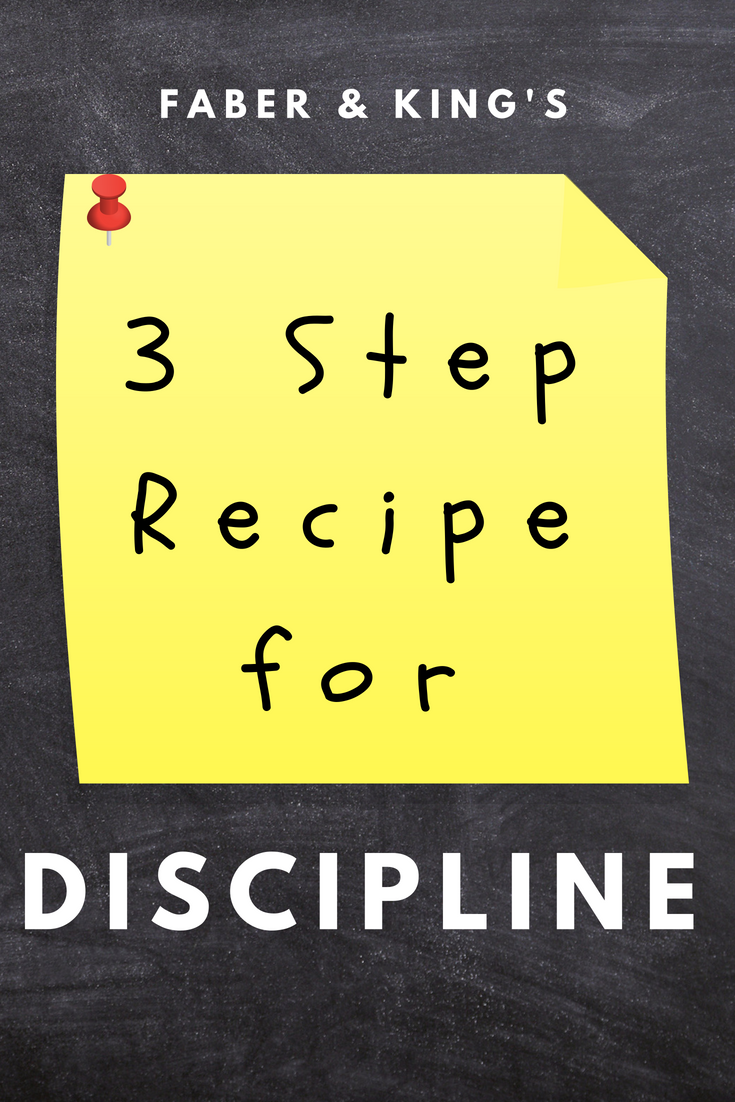 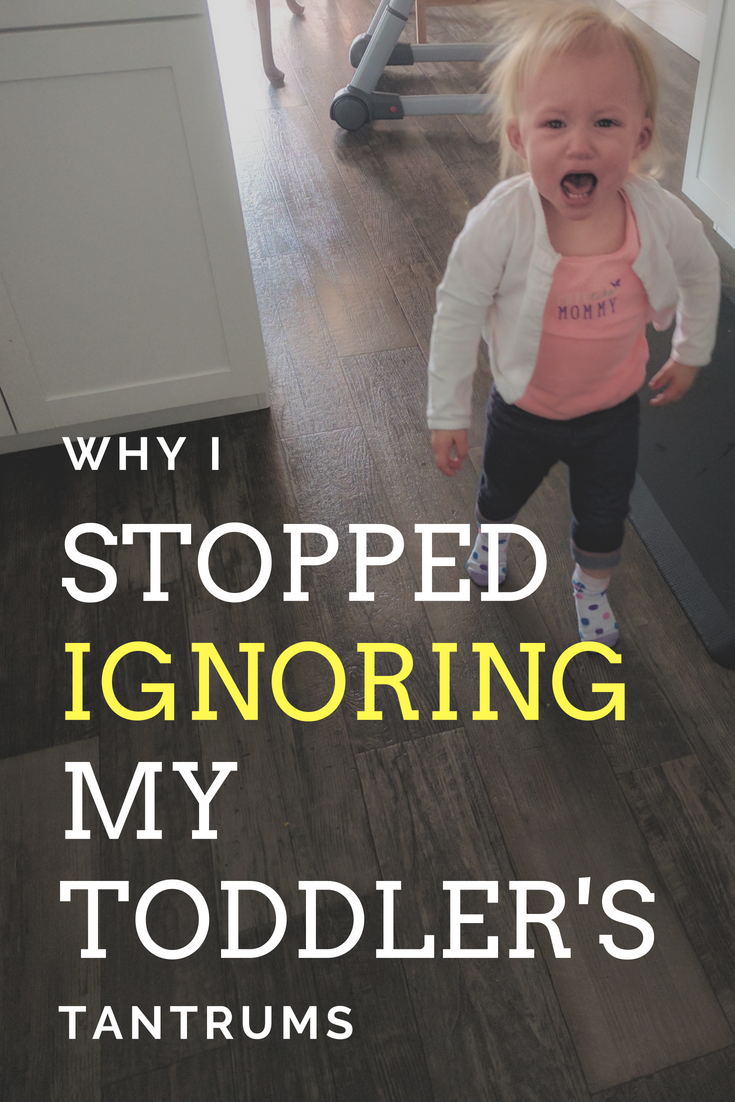 An excellent recipe for how parents can handle problem behavior is found in the book How to Talk so Little Kids Will Listen by Joanna Faber and Julie King (discussed previously here).

Wrong way: Grab the child firmly and say, “If you keep taking away that girl’s toys I will take away all of yours. Now share!” or “Give that toy back or I’ll spank your bum.”

Alternative way: Gently pull him away from the other children and say, “It looks like you’re having a hard time sharing with your friends. It can be fun to play with the trucks. The problem is, Sarah had them first and felt sad when you pulled them away without asking. What do you think we should do?” If the child continues to rip toys from others, repeat that he is having a hard time controlling himself and empathize with him as you keep him away from others.

Wrong way: Angrily grab the child and scream about how stupid of a decision that was. Spank him to show that going into the street hurts just as you’re hurting him now.

Alternative way: Immediately stop him from running into the street. When calm, describe how you felt panicked when he started running to get his ball and say, “It can be fun to play with the ball and race to find it. The problem is, going into the street without me is dangerous. You might get hit by a car. What do you think you can do next time?” Guide him to a solution that involves your supervision when near the street.

Wrong way: State, “I guess you don’t want any food,” and send the toddler to bed without dinner.

Alternative way: Take the dish of food away and state, “It looks like you’re having a lot of fun with dinner tonight. The problem is, the floor and walls are getting messy, and I don’t want to clean a big mess. What do you think we can do?” The child might be creative with this one. It might be as simple as letting them paint with ketchup and mustard in the bathtub. Once a solution has been found, return the food with reminders and a watchful eye. Is this recipe of acknowledging feelings, stating the problem, and brainstorming solutions together always going to get your child to behave? No. Unfortunately children are complicated just as your thoughts and behaviors are complicated. However, connecting before redirecting, using emotion coaching techniques, and allowing your child to brainstorm solutions will make problematic behavior less likely to occur, while also allowing your child to increase in positive traits such as empathy and higher order thinking strategies.

No single parenting strategy will be effective 100% of the time. It’s important to have realistic expectations for your children, which is exactly the topic discussed here.