5 Lessons from Mr. Rogers the World Needs Now More Than Ever: A Review of Won’t You Be My Neighbor 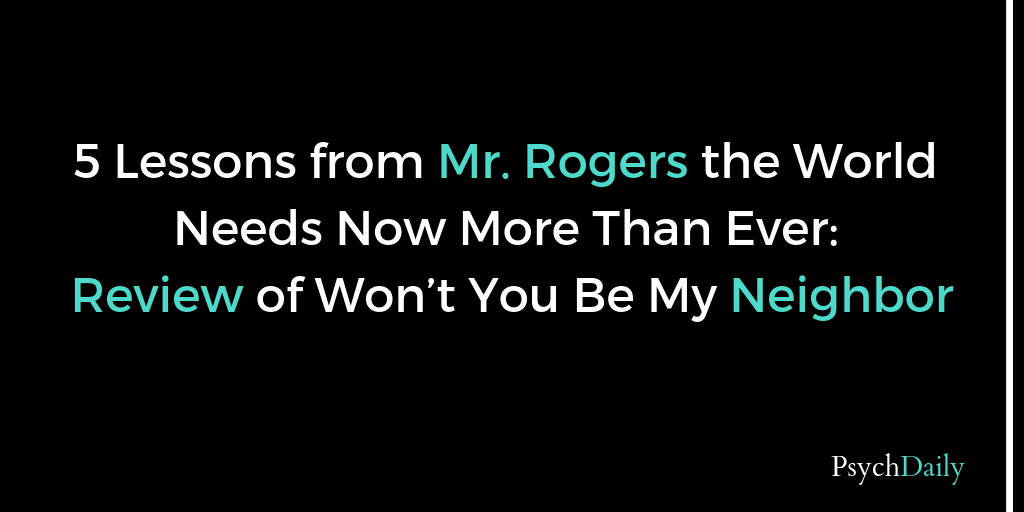 I have been wanting to write something about Fred Rogers for some time. The problem is, where do you start? How do you put into words the impact this man has had on television? On the world? On me?

I admit, as a child, I thought Mr. Rogers’ Neighborhood was boring, especially the neighborhood of make-believe. I preferred Barney and Friends or Arthur. However, the older I get, the more I understand what a radical Fred Rogers really was. The concepts I teach my college students on emotions, parenting, and child development, align perfectly with the principles he embodied, both in his television show and his personal life.

When I got the privilege of seeing the recent documentary about his life, Won’t You Be My Neighbor, I saw him in a new light. This man isn’t just some actor for educational television. He’s a philosopher, a child psychologist, and deserves to be in the ranks with people like Jean Piaget and Erik Erikson.

The documentary “Won’t You Be My Neighbor” contained five profound lessons:

Rogers was the perfect example of emotion coaching, before the term emotion coach was even coined by John Gottman. He encouraged children to express their emotions in words and helped them learn to control their behavior. He said,

Anything that’s human is mentionable, and anything that is mentionable can be more manageable. When we can talk about our feelings, they become less overwhelming, less upsetting, and less scary. The people we trust with that important talk can help us know that we are not alone.

In the film, Rogers’ family finds a note he wrote describing his own inadequacies. It was heartening for me to hear that I am not alone in struggling with self-doubt. Rogers’ son told of how his dad used the voice of Lady Elaine Fairchilde, a mischief-making puppet from Neighborhood of Make-Believe, to express thoughts that were not very Mr. Rogers-like. In a seeming demonstration of his alter ego, Rogers found his own creative way to let out his personal thoughts and feelings.

Men Can be Caring

In one impassioned scene from Won’t You Be My Neighbor, François Clemmons, an African American who played the reoccurring role of Officer Clemmons, describes how he felt truly loved by Rogers. At one point, they embraced in tears when Clemmons realized that the times Rogers expressed his love for Clemmons on the show were sincere. Rogers became like a surrogate father to Clemmons.

He was an inspiring model for young boys to look up to. Boys could turn to an influential male who didn’t solve conflict with violence, who expressed emotions beyond anger or apathy, and treated those who were different from him with kindness. If there were more male role models like him, perhaps we would see less toxic masculinity, which encourages men to be stoic or angry, have power over women, and accept violence.

Everyone has Inherent Value

Each episode of Mr. Rogers’ Neighborhood begins and ends by letting each child know that they are special. Why is this so important? Think of a time in your life when someone truly believed in you. How did they mentor you? Think of someone who was cold with you and did not expect much. Did you grow? I know in my life, I’ve accomplished the most when those guiding me had faith in my abilities. They gave me critical feedback, but they did it with warmth and love. These are the people who really inspire and lead to positive change. If you feel you are a worthwhile person, you’re more likely to act in ways to become one. If you feel you have no worth, you are less likely to try to better yourself. (See my previous post on how Daniel Tiger’s Neighborhood, the series based on Mr. Rogers’, can increase self-efficacy and why it’s important.)

Not only did he tell every child they were special, but he himself treated every person as if they were highly valued. This included welcoming François Clemmons to play Officer Clemmons. As one article describes,

During the show, Mister Rogers invited Officer Clemmons to take a break from his work…and join him in a kiddie pool to cool his feet. As the scene concludes, in what is clearly a biblical gesture, Fred, who was also a Presbyterian minister, takes a towel and dries Officer Clemmons’ feet for him. Twenty-five years later, they reprised the scene during François’ final appearance on the show…Fred Rogers’ friendship and kindness stood in contrast to other scenes involving swimming pools in the 1960s…Black and white protesters staged a “wade in” at the “Whites Only” pool… two of the protesters…remember how the owner of the motel tried to force them out of the pool by throwing acid into the water.

Children Need Adults to Help Them

Rogers often expressed of the great potential television has to help children but felt grieved at the gross misuse of it. He said, “We all have only one life to live on earth. And through television, we have the choice of encouraging others to demean this life or to cherish it in creative, imaginative ways.” He strongly condemned violent or empty media for failing our children.

There are so many times today where children suffer because they are not getting the help they need. Dallin H. Oaks said,

Children are highly vulnerable. They have little or no power to protect or provide for themselves and little influence on so much that is vital to their well-being. Children need others to speak for them, and they need decision makers who put their well-being ahead of selfish adult interests.

Could Rogers have made more money with fast-paced, violent TV? Definitely. But he chose to create meaningful material, rather than highly profitable material. Again, just radical for his time.

While many television shows were featuring slapstick comedy and violence, Mr. Roger’s Neighborhood was addressing divorce, death, the Vietnam war, the assassination of JFK, etc. It’s easy to think that these difficult topics should be avoided and that talking about them will make children confused and fearful. Actually,

it is by addressing these topics head on that lead to decreased fear and confusion. He felt it was every parent’s job to help their children feel safe and secure. In the book The Whole-Brain Child, authors Dan Siegel and Tina Payne Bryson discuss how telling and retelling difficult events with children help to make those big emotions less powerful and help them process and understand events. I highly recommend this book if you would like ideas on how to address tough issues with your children. 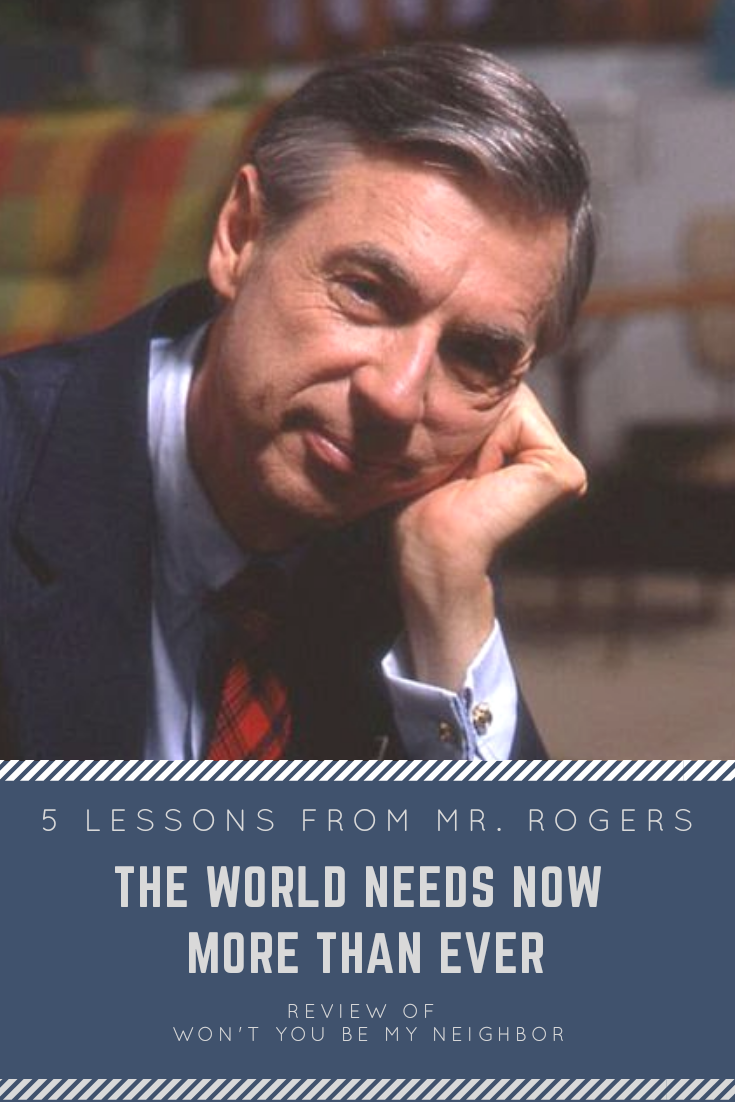 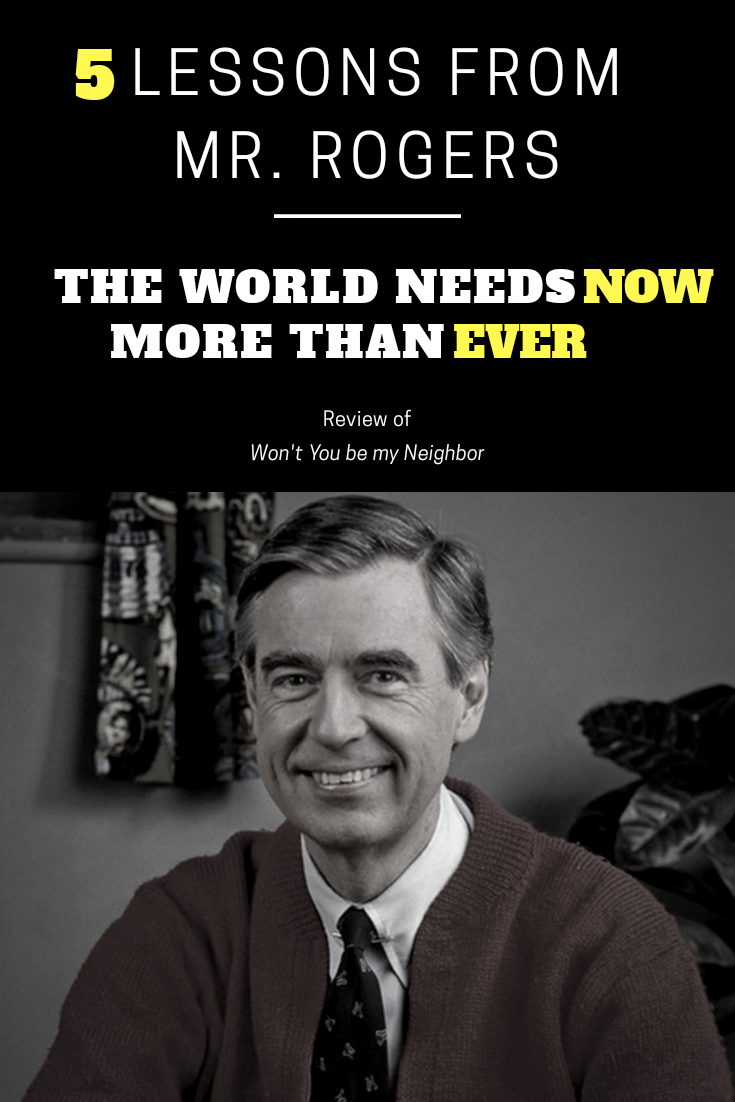 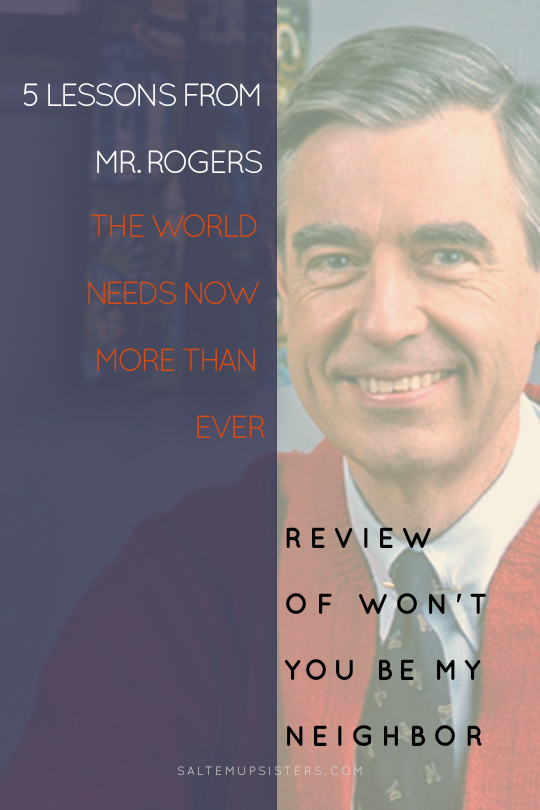 Though the film is very uplifting overall, I walked away with a heavy heart, discouraged that his simple messages of love and inclusion are being forgotten. First, the film showed critics who felt Mr. Rogers led to a generation of entitled narcissists. These critics are misinformed on the value of believing in yourself and your inherent value and underestimate the effects of the self-esteem movement discussed earlier, which praised mediocrity. These are fundamentally different ideas.

Then, the film discussed protesters at his funeral who condemned Fred Rogers for being accepting of homosexuals. What a baffling concept that the so-called Christians would promote hate for a minority group when Jesus Christ himself taught to love thy neighbor. Does loving your neighbor mean you agree with their actions? Certainly not, but it does mean showing everyone decency and kindness.

Fred Rogers considered every person he met to be his neighbor, each one deserving of love. As the United States gets more divided and polarized, I miss Rogers more than ever. I hope all my readers will go see this documentary (and no, I’m not being paid to promote it, if that tells you anything). Let it change you for the better. Let us be more united and promote values that foster connection.

To my readers, I hope you know that you are special. I have been so appreciative of your support for me and my work. I strive to use my blog to promote good, and I hope it has been a light to someone in this seemingly dark world.